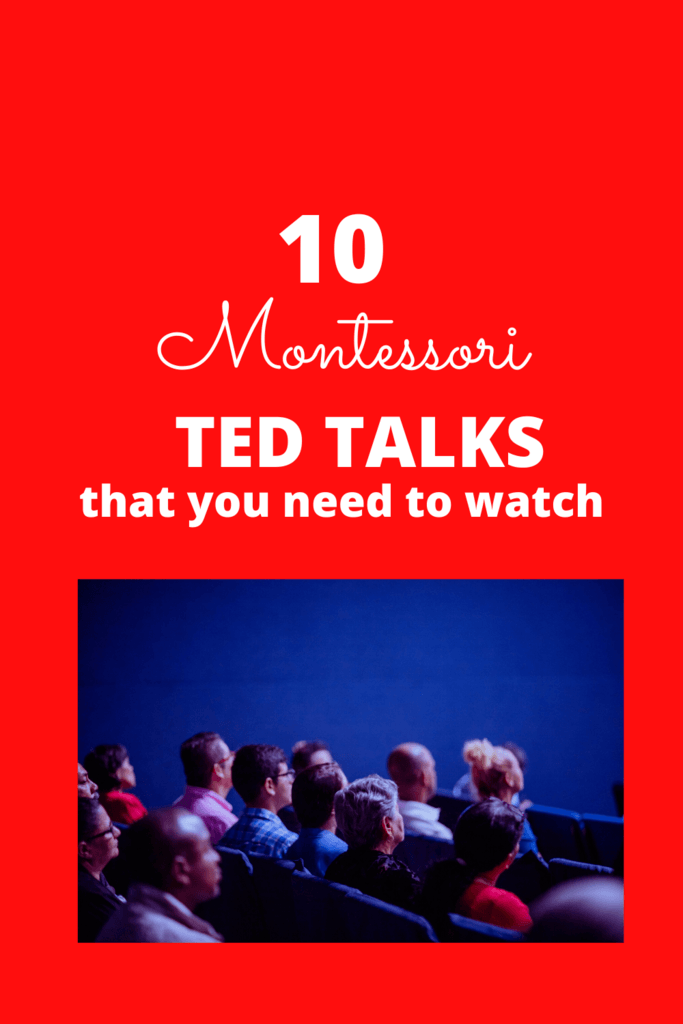 The more we see Montessori in the news, the better it is!

Some of the Montessori ideas, revolutionary in her time, are now common sense in every single school. Did you know that there were no child-size furniture before Maria Montessori made some? How crazy is that!

I encourage you to spread the word about Montessori by watching those TED Talks. Share them on your Social Media, in your schools and with everyone who is curious about education.

What is a TED talk?

The motto of TED talk is : “Ideas worth spreading”.

It's purpose is to spread ideas and inspire and motivate its audience.

TED talks are organised independently all around the world. Anyone can organise a TED talk.

Here are 10 of my favourite TED talks about Montessori and Education:

The most famous advocate of Montessori - Sir Ken Robinson

Sir Ken Robinson is a British author, speaker and international advisor on education in the arts to government, non-profits, education and arts bodies. He advocates for a reform of the education system and talks about Montessori as the most suited alternative.

This talk is his most well known one. It was first shown in 2006 and we are not quite there yet in term of an educational system that nurtures creativity instead of killing it!

Bring on the learning revolution!

This talk is a follow up on his first speech. Published in 2010.

How to escape education's death valley?

Sir Ken Robinson outlines 3 principles crucial for the human mind to flourish -- and how current education culture works against them. In a funny, stirring talk he tells us how to get out of the educational "death valley" we now face, and how to nurture our youngest generations with a climate of possibility.

How to expand your baby's potential? With Zahra Kassam from MontiKids

In this independent TED Talks, Zahra Kassam talks about the importance of the first 3 years and Montessori of course!

Judi, a 40-year veteran in Montessori instruction, helps us explore the beauty that Maria Montessori brought to the world of education from the logic of a trained doctor and the heart of an attentive watcher. The value of being attentive, imbuing one's work and learning with worth, and honoring self and others creates a clear channel through which creativity can flow. These actions need not be limited to children in Montessori education - these principles can be practiced by anyone, at any time.

Looking to Montessori to Guide Education Reform by Anna Lee

Anna Lee has been described as an "educator to the bone." Lee is a first generation Korean-American from the DC region. She believes that the human potential begins within the hands of a child. In 2010, she was appointed the Director of Education at Meadows Montessori in Frederick. With thirteen years experience teaching Montessori, her dedication to early childhood education spans far beyond her years. She has also served as an Intensive Individual Support counselor for Autistic teens. An avid world traveler, she advocates and consults for Montessori programs for schools all over the world.

Letitia thinks even young children have the ability to become independent if given right time, right environment and right education. You will see a 3-year-old cleaning window (literally) in her talk and she will tell us how to build these important personalties including independence, empathy, etc.

Michelle is passionate about Montessori Parent education and has run many parent programmes. She has assisted on training courses in South Africa and America and has trained students in the Montessori approach to education. She is currently as a Montessori Schools Consultant working towards transforming Montessori schools to offer authentic Montessori environments. The theme for Michelle's talk is 'Cosmic Education'. Montessori Education offers an individual approach to education from birth to maturity, which follows the nature of the child through the varying stages and metamorphosis, he goes through, on his way to becoming and belonging as a social human being. Giving him opportunities as he grows to refine and educate himself on his path to adulthood. How we help this growing being reach his full potential is based on the knowledge of the fundamental stages each human goes through on the path to adulthood and the type of environment that would best support this process. What is our role in nature and how do we support both our own growth and the maintenance of nature as a whole?

I'm sharing this new one that was recorded under strict social distancing.

I like the idea that we can all be Montessorian!

Celine Alvarez has made Montessori popular in France and Belgium. She trained as a mainstream teacher to shake things up from the inside. She did an experiment in school, teaching the Montessori way in a mainstream school. This Ted Talk is in French with English substitles.

Have you watched one of these Ted Talks before? What do you think? Do you want to recommend any others?