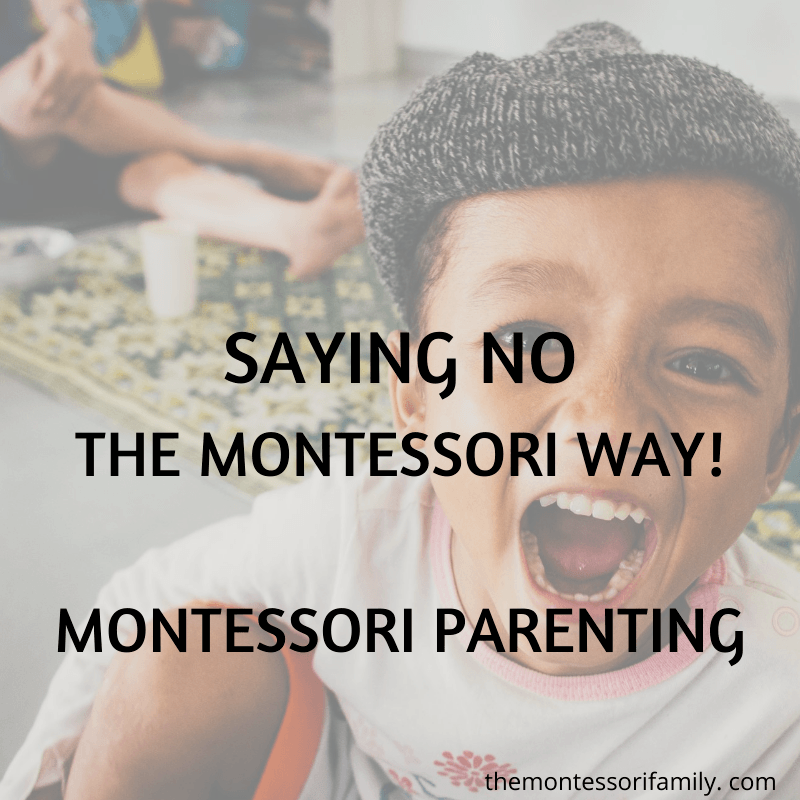 Is there a Montessori way to say NO to children?

When parents discover Montessori, they understand that it is about giving freedom and independence to their children. So when it comes to discipline the Montessori way, parents might be confused and weary of saying no, of having rules as they know “punishment” is not the answer. 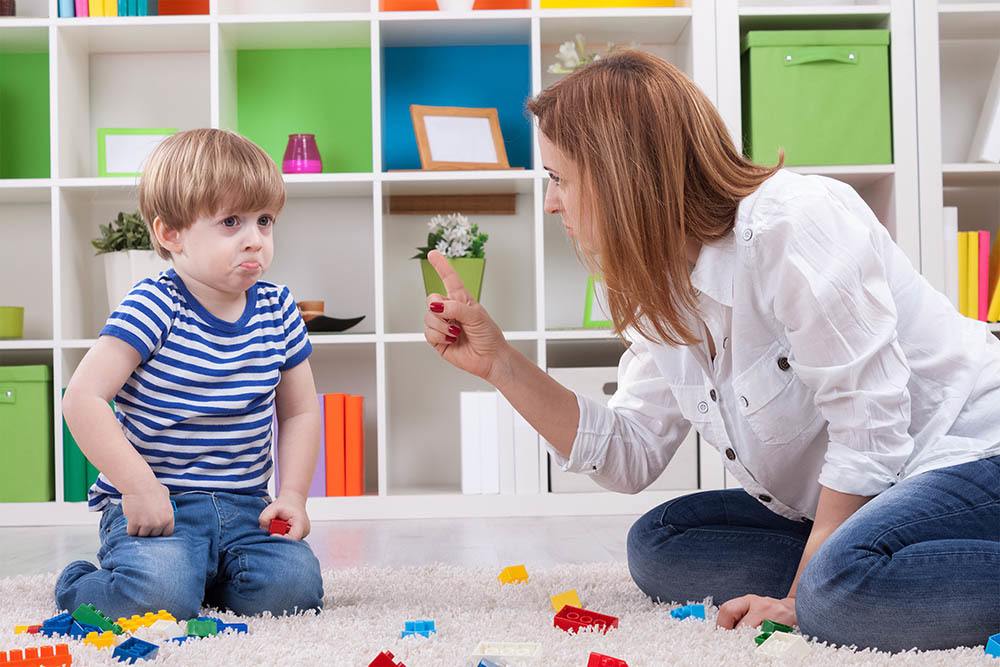 But in the Montessori education, we believe that freedom comes with limits. We give as much freedom as a child can handle and are not opposed to saying no, but we are mindful of when and how to say it. In fact, there is a Montessori way to set up limits.

It’s ok to set up limits

Setting limits teaches a basic life lesson that we can’t have everything we want. Children need appropriate limits.

Maybe you feel uncomfortable setting up limits because you don’t like to say no. Maybe you were raised by very strict and authoritarian parents and you don’t want to reproduce their parenting style. But there is a middle ground between being too strict or too permissive.

“To let the child do as he likes when he has not yet developed any power of control is to betray the idea of freedom” Maria Montessori said.

So, you give your child as much liberty as she can handle in line with safety: safety for the child, safety for others and the collective interest.

When does a child understand no?

Most parents who ask for support about how and when to say no, have a toddler. And it is the age when a young child doesn’t understand 'no' in the way we do.

Children under the age of 3 have a very immature brain and don’t have the capacity yet to reason. Young toddlers are also “programmed” to explore. They want to move, to touch, to taste, to experiment and to understand cause and effect. And the irony is that you saying 'no' becomes part of the experiment.

Every time they approach the TV, you say 'no' so they repeat that action again and again, coming closer, looking at you directly into the eyes, waiting for you to say 'no'. You have probably thought “She knows she cannot do it and she does it anyway. She is provoking me”. She is not provoking you on purpose but she definitely tests what she can or cannot do and is delighted that her actions lead to a reaction, just like a scientist conducting an experiment. 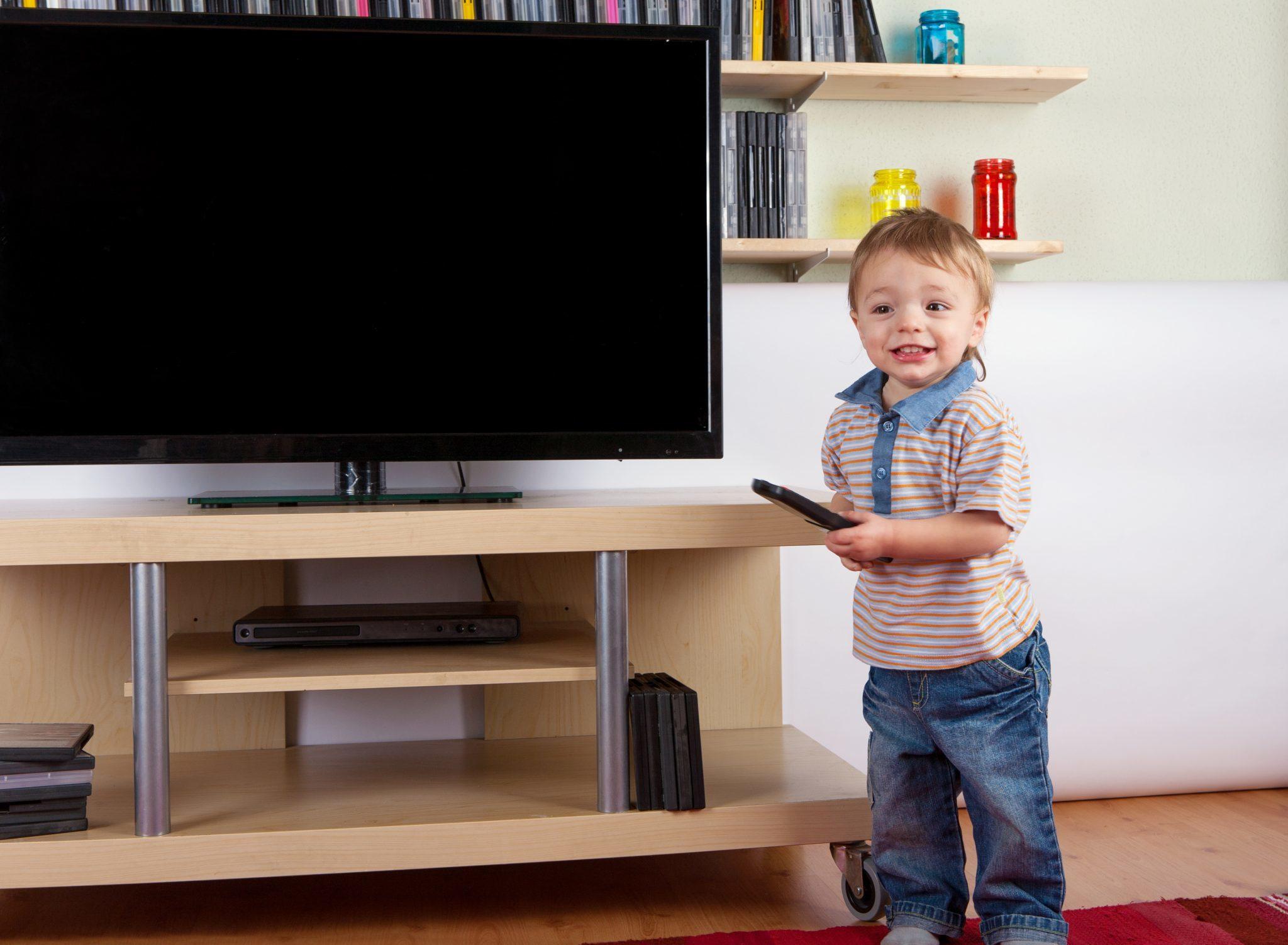 Your child will understand the intention behind the 'no' because of the tone of your voice and any action you follow through with to stop her doing it. But don’t expect her to respect it automatically. It depends on if you use it correctly - not too often and when really needed.

Prevention is always your best tool. If you set up a safe space for your child to explore, you will reduce the number of times you have to set up limits.

You can do this easily at home. Make sure your home promotes independence. Keep things out of reach that you don’t want your child to touch and pick your battles. Is it very unsafe to climb up the sofa or is it a habit to say no every time your child tries to climb on it? 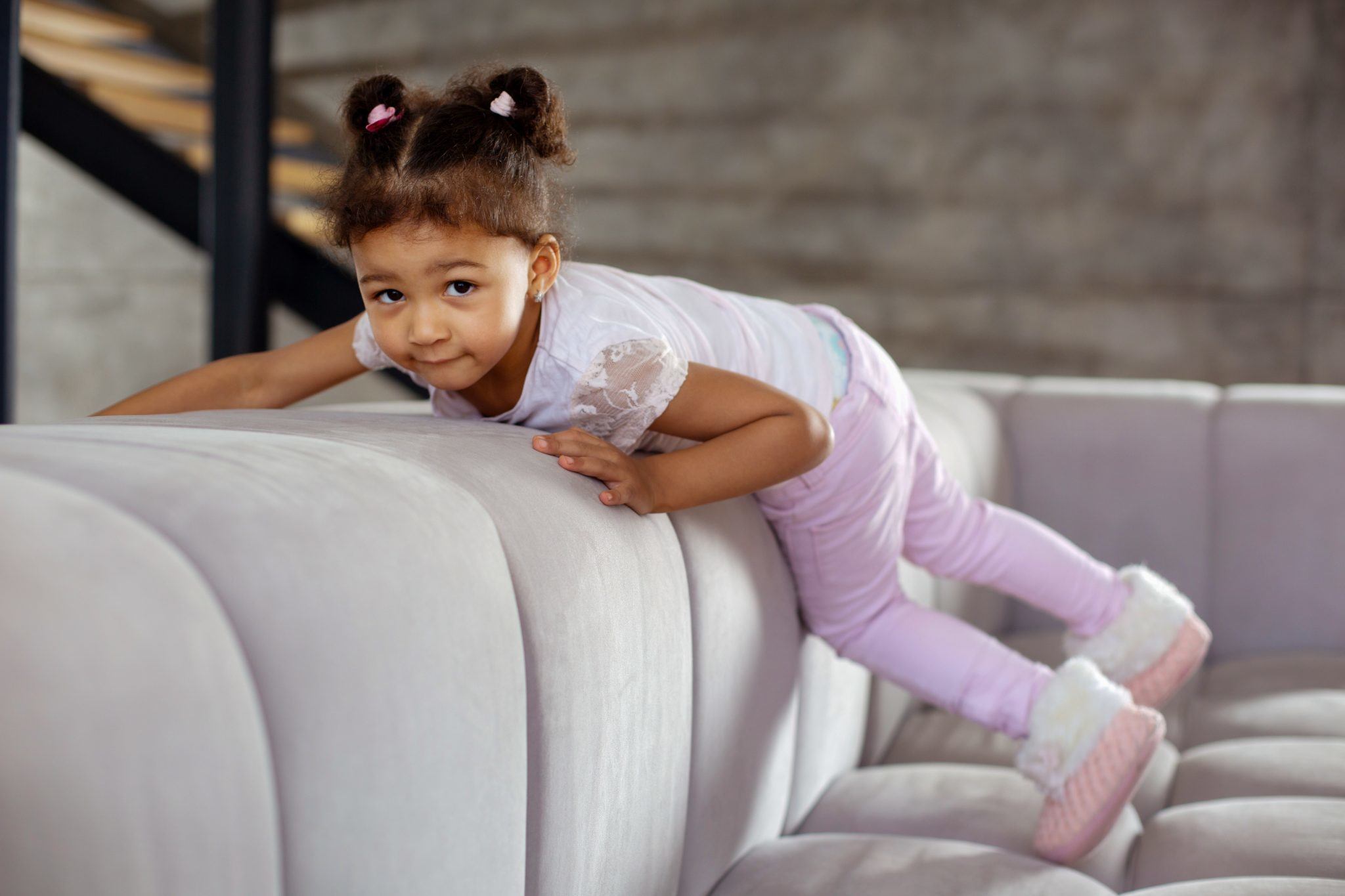 In general, I also avoid situations that a young child cannot cope with unless I really have to. I wouldn’t go to an adult’s meeting with my toddler, I would avoid walking in a busy street and I wouldn’t take my toddler to Poundland with the unrealistic intention to only buy what I need.

Keep your No for safety reasons

If you see everything under the lens of safety, you will quickly review your rules and reduce the number of times you have to say no.

What are your most important rules? What you are 100% sure you want to say no to? Check if those rules have something to do with safety. If not, consider if you really want/need to reinforce them

If you say no too often, it loses its meaning and importance,  especially if you say it without conviction or following through with an action. Often we give up because we are not convinced why we are saying no.

With young children, under 6, you don’t need to give lengthy explanations. Children in the first plane of development need to know the rules in their family and will accept them because they love, respect and are connected to their parents.

Children over 6 will want to know why! They are the master of negotiation. You don’t have to give them the in and out of each rule. For example, if your rule is one biscuit for tea and your child asks for a second one just state your rule “you had one biscuit, we only eat one biscuit for tea”. Your child may question your rule and you may have to explain that with more than one biscuit, he will have too much sugar for that day or might not get hungry for dinner.

What to say and do instead of No

When we talk about “saying no”, we can become a bit fixated about the word. But in general, it is about setting limits. What is important here is that your child understands, little by little, why there is a rule and what he can do instead of what you are preventing him doing.

So here is what you can try instead of saying no:

For situations where there is a risk, you want your child to understand what he has to do immediately. You need to act fast and will probably scream whatever and grab your child.

But when your toddler becomes more inquisitive and prone to putting himself into danger, I would suggest practicing some “dangerous” situations in a safe way. You could walk in a quiet street, knowing that it’s unlikely that a car will drive past and every time  your toddler wants to walk on the road, remind him of the rule “the road is for the cars. Mummy and Dylan walk on the pavement”. 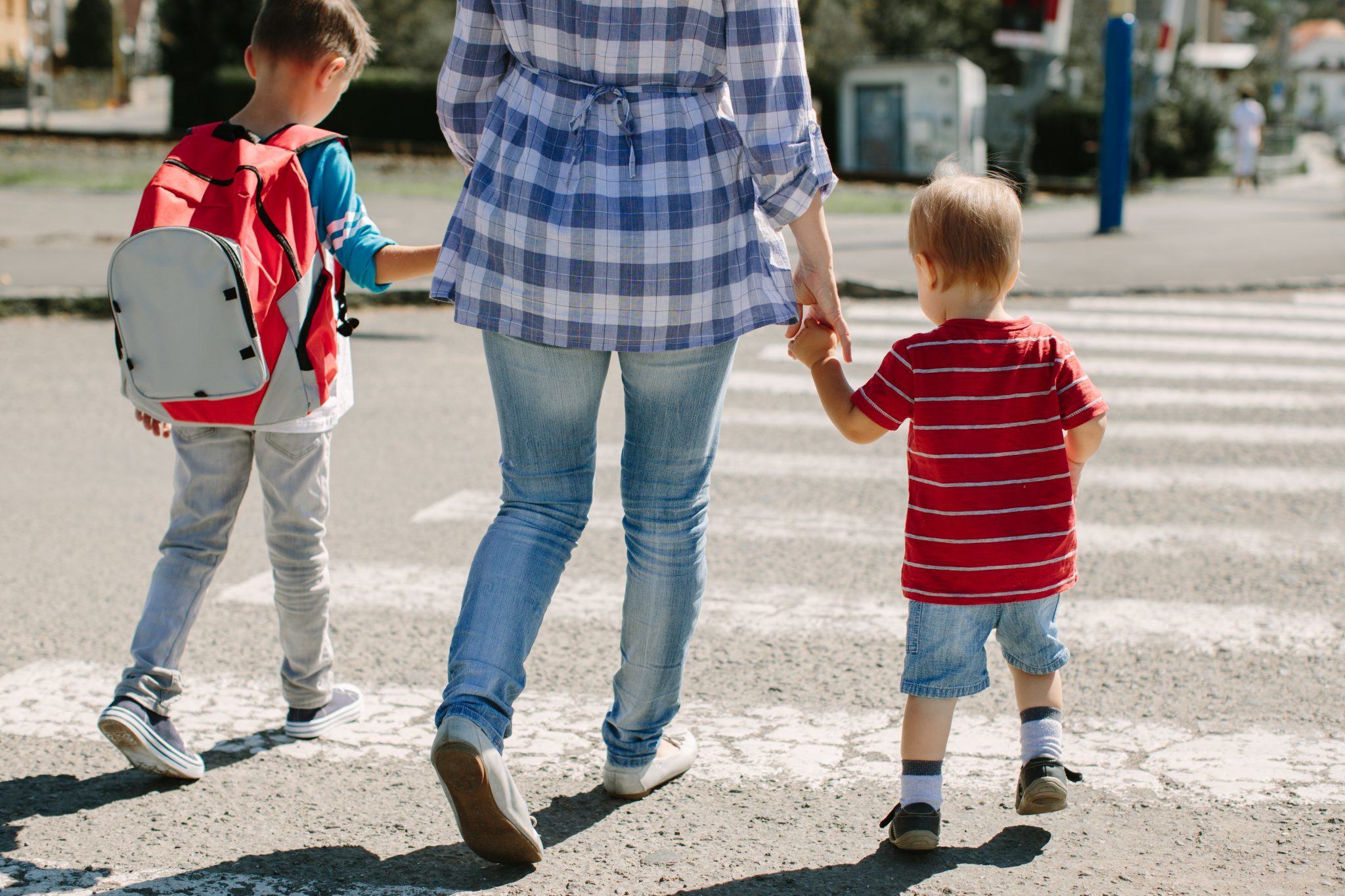 Every time you state a rule, you may have to follow with an action. Young children have to embody what needs to be done. They have to see what you mean. So redirect and show what the alternative is. Role model what you want them to do instead of what they were about to do.

As Jane Nelson said in “Positive Discipline” -  If you say it, mean it. If you mean it, follow through with kind and firm action.

And sorry, there is no miracle here. You may have to repeat yourself every day, several times a day. So be ready to redirect, to welcome the tantrum and stand firm by your most important rules.

Previous Post Where to find a Montessori learning tower? Next Post Meet a Montessori Family: Sophie, her sons and her preschool project