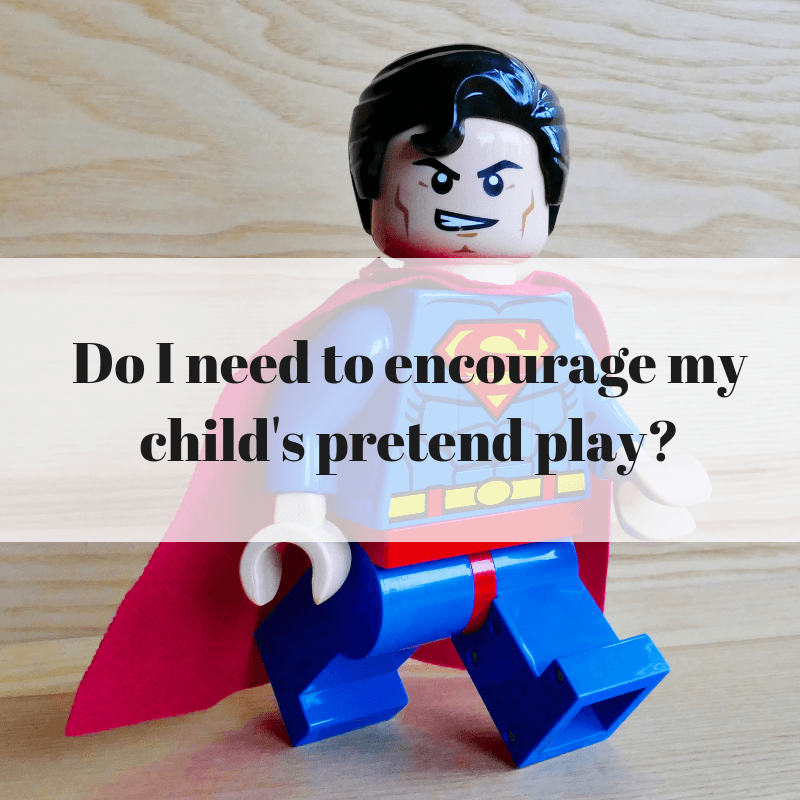 Montessori Parenting: Do I need to encourage my child to pretend play?

Montessori parenting: Do I need to encourage pretend play?

Montessori is well-known to encourage children to have real experience and to participate in the daily activities, such as cooking, taking care of the house and themselves.

In fact, a Montessori teacher would say that the children work in the classroom.

They don’t play. You don’t find proper toys in the classroom.

Yet the children are happy, contented and learn with joy.

What does it mean for you as a parent? Can you let your child play with toys?

In this blog post, I will discuss pretend play.

Watch the video or read below

Maria Montessori was well known for favouring reality and practical life activities over toys in the classroom.

At first, she was not against toys. In her first classroom, some generous benefactors offered toys to the children. But she quickly noticed that the children, when given the opportunity, preferred activities based on reality.

Here in the UK, many nurseries encourage lots of pretend play. They introduce a “house corner”, “a dressing up area”, a special “let’s go to the moon” day or a “superhero week”. 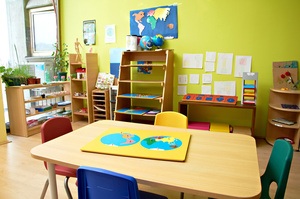 Before the age of two, the child is in an unconscious stage.

He explores his environment, he comes upon opportunities.

When he plays, he is in fact “manipulating, exploring and trying to figure out what it is he is playing with”.

He will develop his gross and fine motor skills and explore through his 5 senses. 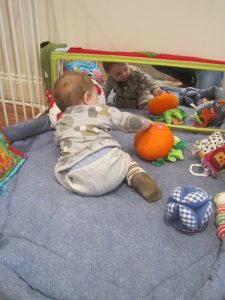 He will develop his language to play and he will interact and connect with his close caregivers.

In fact, young children are hard-wired to explore.

During that stage, babies might interact which each other but they don’t play together. They are too busy developing their own skills!

From two years old your child starts to express his will.

The conscious stage, according to Maria Montessori, starts around 3 years old but we have all observed that children around the age of two start to express their will.

It’s when they start to choose what they want to do or to play with. 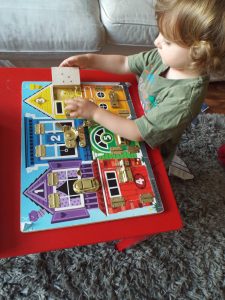 It’s a time when the child starts to think about things in their minds. They know that when objects are out of sight, they are still somewhere.

They start to know that when you leave the room, you go somewhere else. Even if they still don’t know exactly when you are coming back!

Because of that new thinking ability, they can now engage in “pretend play or play based on imagination”.

It doesn’t’ mean that they will play with someone just yet.

At first, it’s the stage of parallel play. Children play alongside each other without interaction.

And now, let’s chat “about what is pretend play”

Now your child’s mind can imagine and pretend.

They can use one thing to represent something else. They take a wooden block and pretend to eat it. They take a stick and put it to their ear to use a phone…

At first, you will notice that your child imitates you and any action that he is exposed too.

He will probably start with the activities that you carry on often with him.

It’s where Montessori and mainstream preschool education will differ.

As a Montessori teacher, I would encourage you to expose your child to many concrete and realistic resources.

Your child will show an interest in what he is naturally exposed to.

His play will be influenced by what he experiences.

For example, if you go to the farm often with your child, it’s likely that your child will naturally imitate the animals he sees there, the tractor noise and so on. If you want to offer toys and resources to your child to develop his imaginary play, then you could offer him some farm animal plastic toys and some farm books. 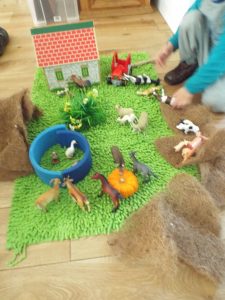 But if he is exposed to a pretend play scene that has no meaning for him, he will not use it in an expected way.

For example, I remember going to the local playgroup with my son who was just over 2 years old.

The team had set up a post office in the Wendy house. My son wandered inside the playhouse and started to hand me the envelope through the window, telling me “coffee mummy”, pretending to drink coffee and eat cakes. The lovely member of staff came closer and attempted to show him how to post the envelope, adding stamps and so on. I went on to explain that my son hasn’t been to a post office yet (I rarely go to the post office!) and he was playing “coffee shop” instead, an experience that he was very familiar with.

Another example with my daughter: we were living in Ireland at the time and we were flying back to Belgium every 3 months since she was 4 months old.

One day, we visited a friend who had a son of a similar age. They were both around 2 and a half years old. The boy had a plane’s toys with all the little people and luggage. My daughter started to play eagerly, placing the people in the plane, rolling the luggage, placing the pilot in the right seat and taking off to visit Granddad.

My friend then told me that her son had never played with the toy. They had had it for a long time. He had never experienced travelling by plane, so he had no interest in the toy.

So, do we allow pretend play? Is it compatible with Montessori?

Yes, of course! But the main difference with Montessori would be to encourage imagination based on reality.

Montessori recognized that children’s ability to imagine things that were not actually present demonstrated a special mental ability of high order.

She saw that “it was the foundation of intelligence itself and that it was responsible for the curiosity that underlays all scientific exploration of the environment. Imagination is the real substance of our intelligence. All theory and all progress come from the mind’s capacity to reconstruct something.” (The Child, Society and the World, Chapter 3, p.48).

Maria Montessori encouraged us to avoid fantasy and limit fairy tales, fantastic characters and anything that is not real. This has evolved since her time to include TV characters, the merchandising promoted by fast food restaurants and so on.

Maria Montessori said:
Imagination really does not enter into the problem, because in telling fairy tales it is we (the adult) who do the imagining. The child only listens. (The young child) cannot distinguish well between the real and the imaginary, between things that are possible and things that are merely ‘made up”

By telling fairy tales or giving toys to our children based on fantasy, we impose our adult’s imagination upon them. When given a choice, children will be naturally drawn to realistic stories, toys and activities.

It seems that nowadays we mainly encourage fantasy and we want to let our children play to protect their own childhood and innocence. A childhood with an emphasis on the fantasy-based play is typical of our western culture. It’s especially true since the apparition of the television and the development of merchandise.

Studies of children in traditional societies illustrate the dominance of reality-based play outside modern Western cultures.

“Kids like to do real things because they want a role in the real world,” Angeline Lillard says. “Our society has gone overboard in stressing the importance of pretence and fantasy for young children.”
When given a choice, 3- to 6-year-olds preferred performing real activities over pretending to do them, (Lillard and colleagues reported online June 20 in Developmental Science.)

Encouraging pretend play, even based on reality, shouldn’t be done to the detriment of the real experience.

For a child, it is always more interesting to prepare his own snack than to pretend cook. 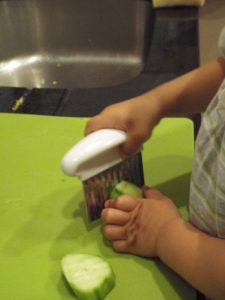 A question that is often asked in my Facebook group is: “should I buy a play kitchen? Is it Montessori?”.

My answer is always the same “you don’t need a play kitchen but if you give one to your child, make sure that you give lots of opportunities to your child to really cook, to use the sink, to prepare his own snack”. 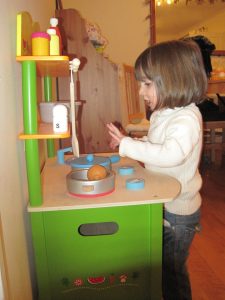 If you want a dressing up area, a play kitchen and so on, go for it, but allow your child to develop real skills too.

Many parents have hacked a toy kitchen to make it usable for a real purpose. After all, the pretend play kitchen is the perfect size for a child!

Be also aware that commercial pretend play toys are self-limited. A toy plane is a plane only, the fireman outfit can only be a used in a certain way and so on.

Try to have a balance between those toys and some more open-ended resources such as blocks, scarves and even some recycled materials like boxes, cardboard tubes and lids. This is where your child will really play with his imagination.

So, can you introduce fantasy at some point?

Again, yes, of course, but let your child guide you!

When your child is verbal, when she can distinguish between reality and fiction, she is going to start to pretend more and more by herself. She might pretend that she can fly like a butterfly.  And yes, even if you don’t introduce fantasy in your home, your child will be exposed through friends, schools or screen to superhero, fairies and so on.

My children are now 6 and 10 and I noticed a shift of perception from 4 years and a half.

Before they couldn’t be sure if the fantasy characters were real or pretend.

I allow them to explore those fantasy worlds without going overboard by offering them plenty of fantasy-based toys.

I started by allowing some toys that would still promote open-ended play and would allow them to create stories instead of playing a script written by adults.

So, at first, I favoured dressing up to the fixed playset. Or I would combine the figurines to some open-ended resources.

I would make sure to offer a balance with more opportunities for reality-based play and real experience than fantasy.

Right now, my son loves superheroes and explores the stories, reads books about them and plays with his figurines. 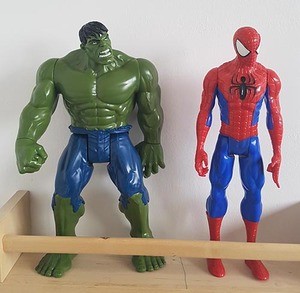 He also plays with various open-ended resources and many kinds of building blocks. He pretends plays with his sister, he draws and creates in many ways. And both my children participate in the day-to-day chores of the house. 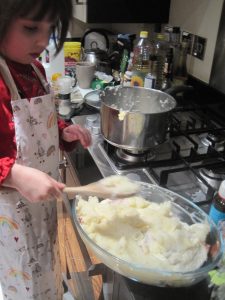 – Extend those experiences with toys and resources if you wish

So what about you? Does your child like pretend play?