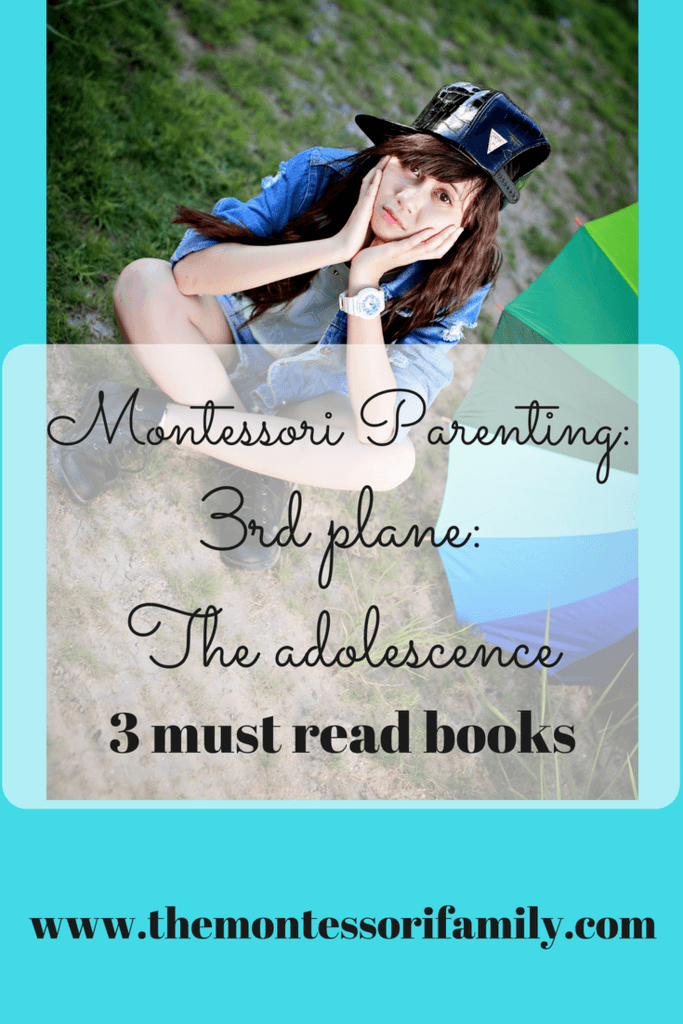 Montessori Parenting – are your ready for the teenage years?

My first born is reaching the doors of the third plane of development, aka “the adolescence”.

How did that happen?

My daughter is 10 and a half and has started to “change”. I have to admit I was not expecting any physical changes until she was around 12 years old. I was a late bloomer so I assume she would be too.

She is still very much a little girl but the onset of puberty startled me and I want to be as “prepared” as possible for what comes next.

Expect more posts about the third plane as I explore it for my own benefit.

Anyway, here are a few resources for the adolescent stage that might help you to reflect on your parenting, on your child and how to welcome your growing child.

I first want to share with you what Maria Montessori said about the Adolescence stage.

The third plane of development

“The third period goes from twelve to eighteen, and it is a period of so much change as to remind one of the first. It can again be divided into two subphases: one from twelve to fifteen, and the other from fifteen to eighteen. There are physical changes also during this period, the body reaching its full maturity.” (The Absorbent Mind, p. 18)

“Psychologists interested in adolescent education think of it as a period of so much psychic transformation that it bears comparison with the first period from birth to six. The character is seldom stable at this age; there are signs of indiscipline and rebellion. Physical health is less stable and assured than before” Maria Montessori, The Absorbent Mind, p19.

The adolescent enters a period of intense physical and mental changes. So intense that we can compare this period to the first period and even more to toddlerhood. So think about how your toddler was: intense, emotional, deeply engaged in some activities, testing the boundaries, self-centred, etc. Then you may be able to see some resemblance with your teenager. However, your teenager is not a little child anymore.

“The adolescent must never be treated as a child, for that is a stage of life that he has surpassed. It is better to treat an adolescent as if he had greater value than he actually shows than as if he had less and let him feel that his merits and self-respect are disregarded.” Maria Montessori, From Childhood to Adolescence, p 72

In the same way, I have shown respect for my child, I want to show respect for her while she becomes an adult. I need to trust that she wants and can contribute to the society we live in. Adolescents have big dreams and big expectations, they are passionate and they might need us to guide their passion. However, as parents, we have to be aware of our fears, anxiety and expectations. As our adolescents start to choose a “professional” path, we have to ensure that we respect their choice and encourage their passion.

I attended the Montessori Conference in London this year. One of the speakers was Scilla Elworthy. She is a peace activist. She was nominated three times for the Nobel Peace Prize for her work with Oxford Research Group to develop effective dialogue between nuclear weapons policy-makers worldwide and their critics. During her speech at the Montessori conference, she explained how she witnessed, as a child, on the television the aftermath of conflicts and wars. I’m ashamed to admit that I cannot remember which conflict she was talking about. The point is at the time, she was only 10 but she felt an urge to help, ran in her bedroom and packed her suitcase. Her mother, far from negating her feelings or telling her that she couldn’t do anything because she was still a child, supported her. She encouraged her to find what she could do to help the refugees, what future training and job she could take on to help people victims of conflicts. She fully supported her desire to be an activist.

This was very emotional to hear her story, what led her onto her path for peace. She encouraged us to welcome the teenager’s passion and to use their incredible energy toward good causes.

“If puberty is on the physical side a transition from an infantile to an adult state, there is also, on the psychological side, a transition from the child who has to live in a family, to the man who has to live in society. These two needs of the adolescent: for protection during the time of the difficult physical transition, and for an understanding of the society which he is about to enter to play his part as a man”. (From Childhood to Adolescence, p. 60)

It’s during the adolescence that the child will transition into adulthood, that he will explore what the society is for him and how he can contribute.

As a parent, I hope to be a guide and a safety base for my child.

I still hope that I have 2 years ahead of me to be “fully” ready. At least ready, in theory!

So I have added to my reading list those books:

And I have discovered this guy: Josh Shipp

He explained that your teenager will test you to see if you hold on. I remember my teacher while I was studying to become a psychologist saying something similar to us about adolescents.
A teenager says “let me go but be there to hold me”. I still remember it today and I will try to remember this if we go through some testing times with our children.

Do you have a teenager at home? Have you read those books?