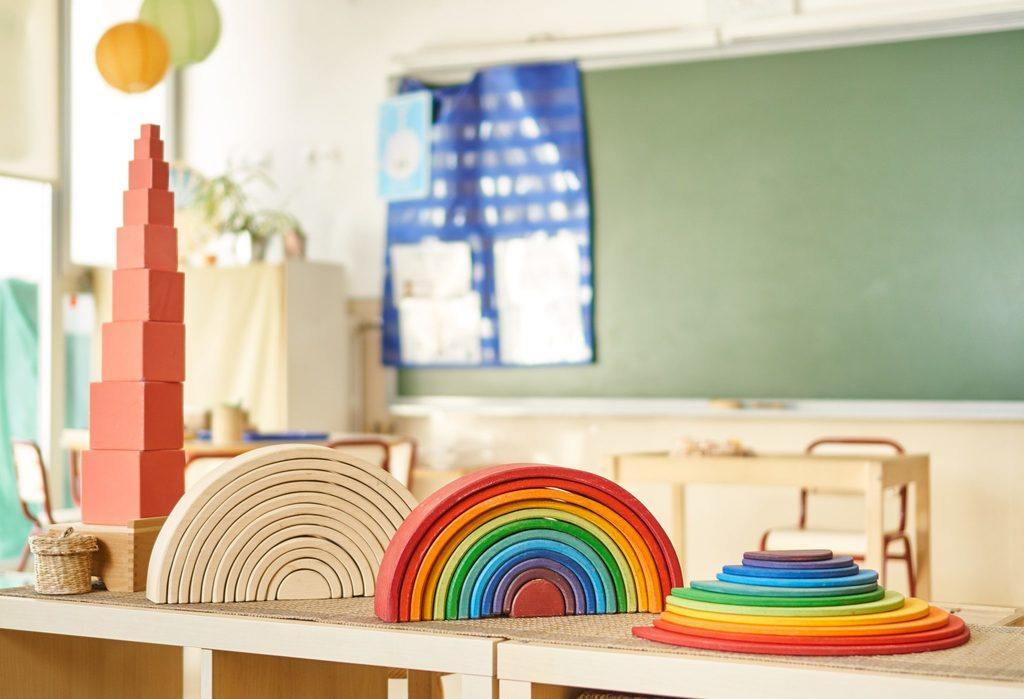 Is the Grimm’s Rainbow in line with Montessori? 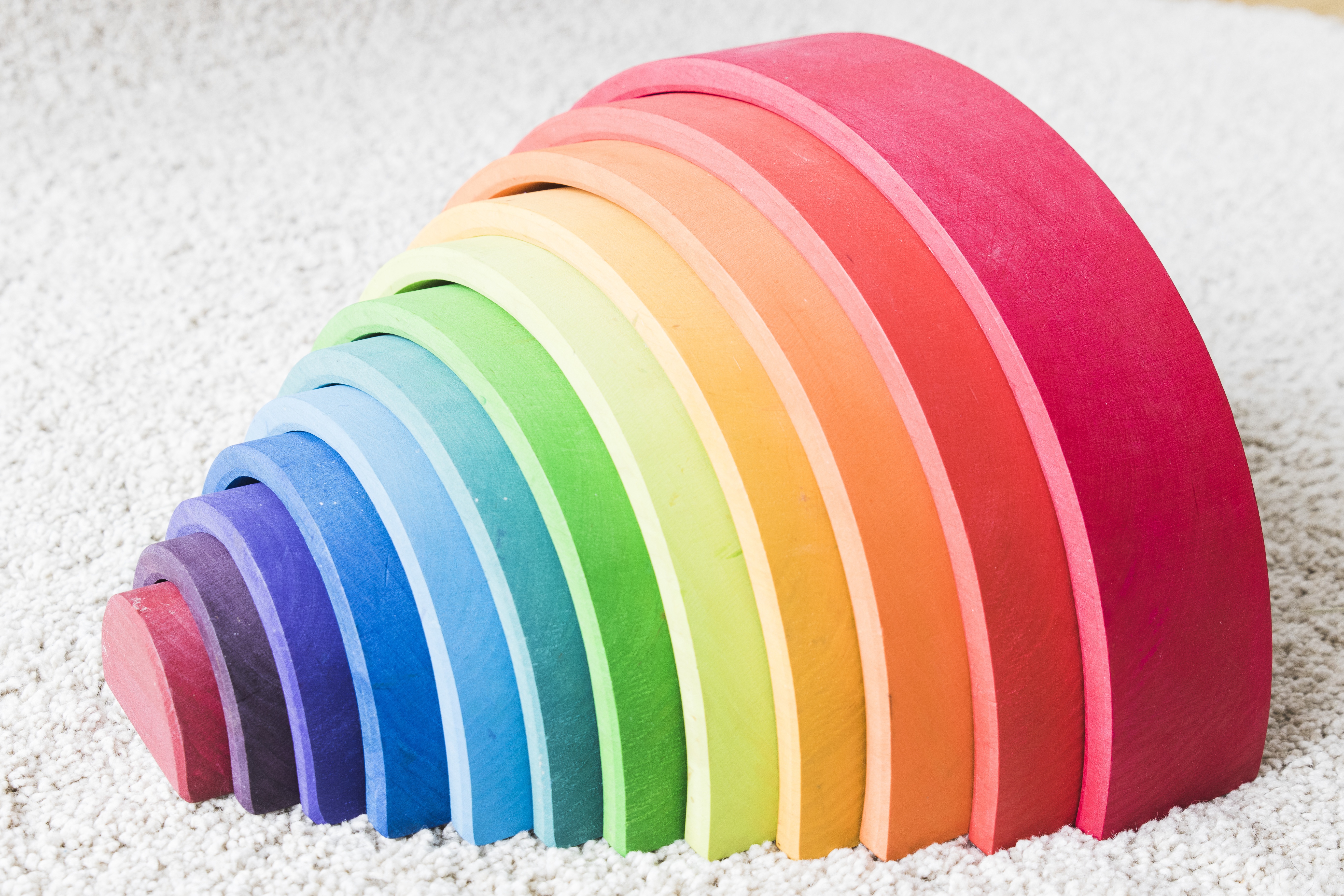 Grimm's brand toy is super popular among families. Somehow, in the recent years, it has been associated with Montessori. You can spot the Grimm's rainbow on most Montessori shelves (shared on Instagram).

In our Facebook group, there isn't a single day when I am not asked if it's in line with Montessori, and if it's a must-buy item. Because it's a high cost item, parents want to know if it will be well played with. It seems that opinions are divided on the matter. While some parents are highly satisfied saying that their children use them daily, other state that the toy is left untouched on the shelf.

The rainbow toy was first designed by the German brand Grimm's.

There are a few misconceptions about Grimm's toys & Montessori.

First, let's say that those toys are not Montessori materials.

For a start, they are "toys." Montessori didn't design toys, she used materials.

In passing, many of these materials were created before her time.

Grimm's toys are beautiful and in line with what I believe Montessori is in the home.

Children need hours of free play with natural and open-ended material so the Grimm's brand is a good fit.

Grimm's company was founded in 1978. They describe themselves as a family owned business, following the principles of the Waldorf education and other alternative educations such as Montessori. 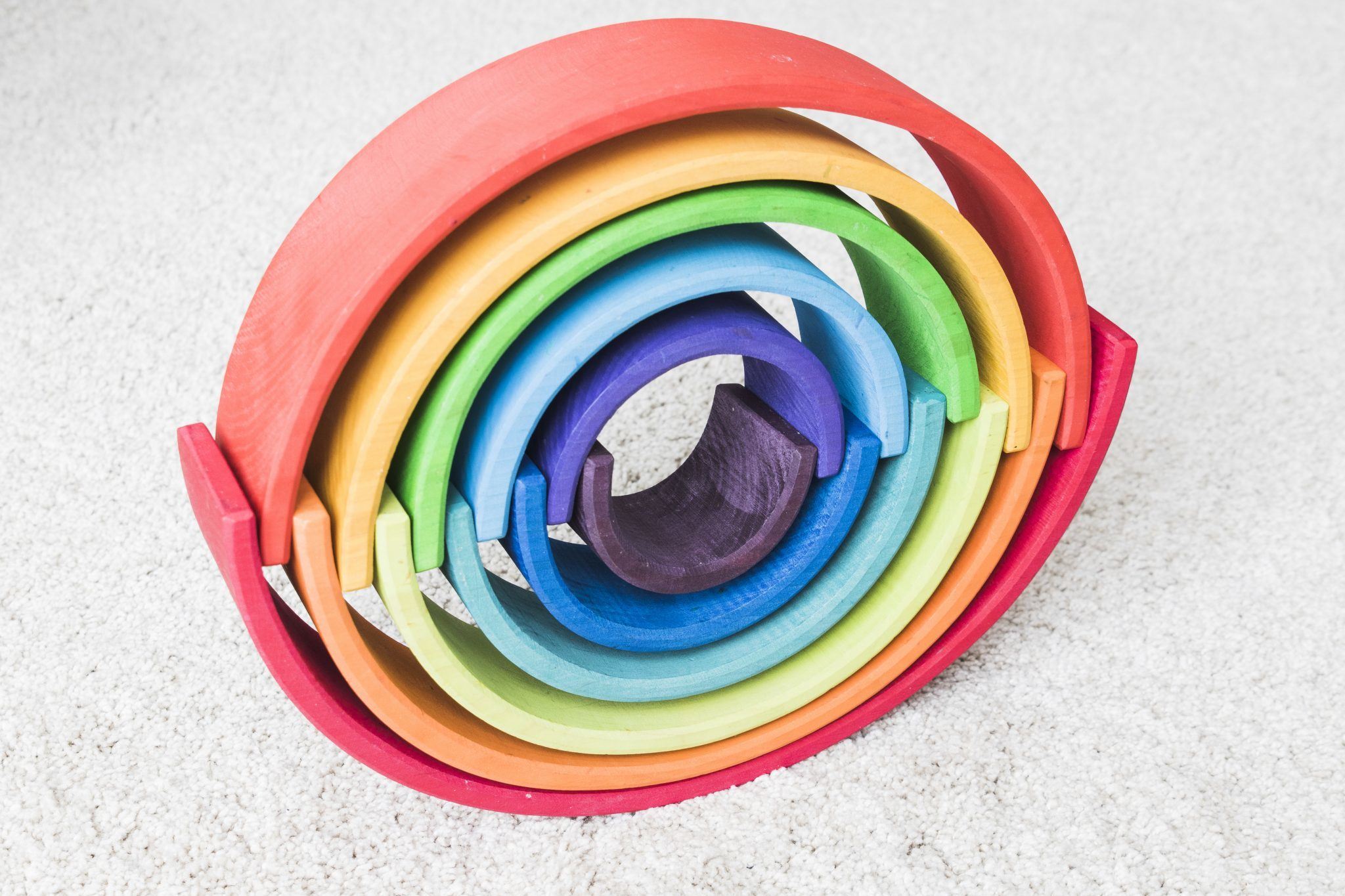 I would say that they are more in line with Steiner/Waldorf than Montessori.

The Grimm's company clearly bases its design on the Waldorf ideas and Steiner himself was inspired by the blocks designed by Froebel.

Froebel has inspired many alternative educators, including Steiner and Maria Montessori. He believed in self-activity and play as being essential for children's learning. In 1837 (72 years before Montessori founded her first school), he created a set of playthings to allow self-directed learning through play.

Rudolf Steiner, the founder of Waldorf education, suggested that children’s toys should be largely unformed in order to stimulate a child’s imagination. Waldorf toys are made of natural materials that develop the senses and promote imagination.

While Maria Montessori was also inspired by Froebel, she designed her own material differently. She designed materials that have a specific purpose. Each material refines a specific skill through one sense. 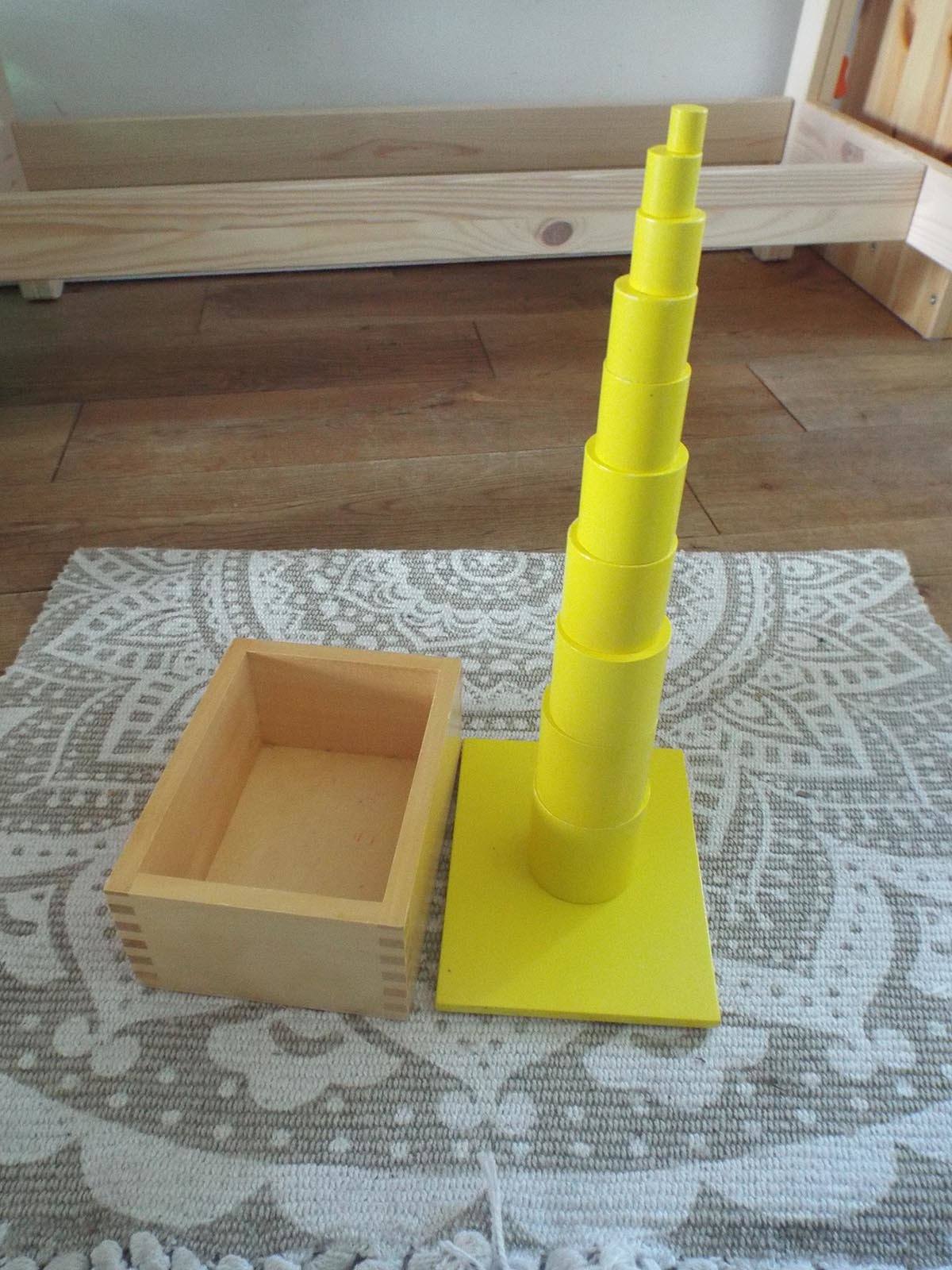 They are also made of natural materials and they also develop the senses. But Maria Montessori was developing teaching aids for the classroom. In addition, she was encouraging parents to have a few simple toys at home.

Many parents are under the impression that they need "the rainbow toy."

I personally was not able to afford these toys when my daughter was little. They are indeed beautiful, ethically made and can become a heirloom to pass on to the future generation.

I don't believe in having the whole collection of Grimm's toys. One Grimm's rainbow is beautiful. Buying the Black and White and the pastel colour as well, it's a collection.

A big box of wooden blocks (found in a charity shop by the way) was enough for my children.

I finally bought a small rainbow when my daughter was 3. She used the rainbow to make an enclosure for her farm animals. That is all she did for years!

When my son was 3, I bought the regular-sized rainbow and the semi-circles, and they were, at last, doing something with it. 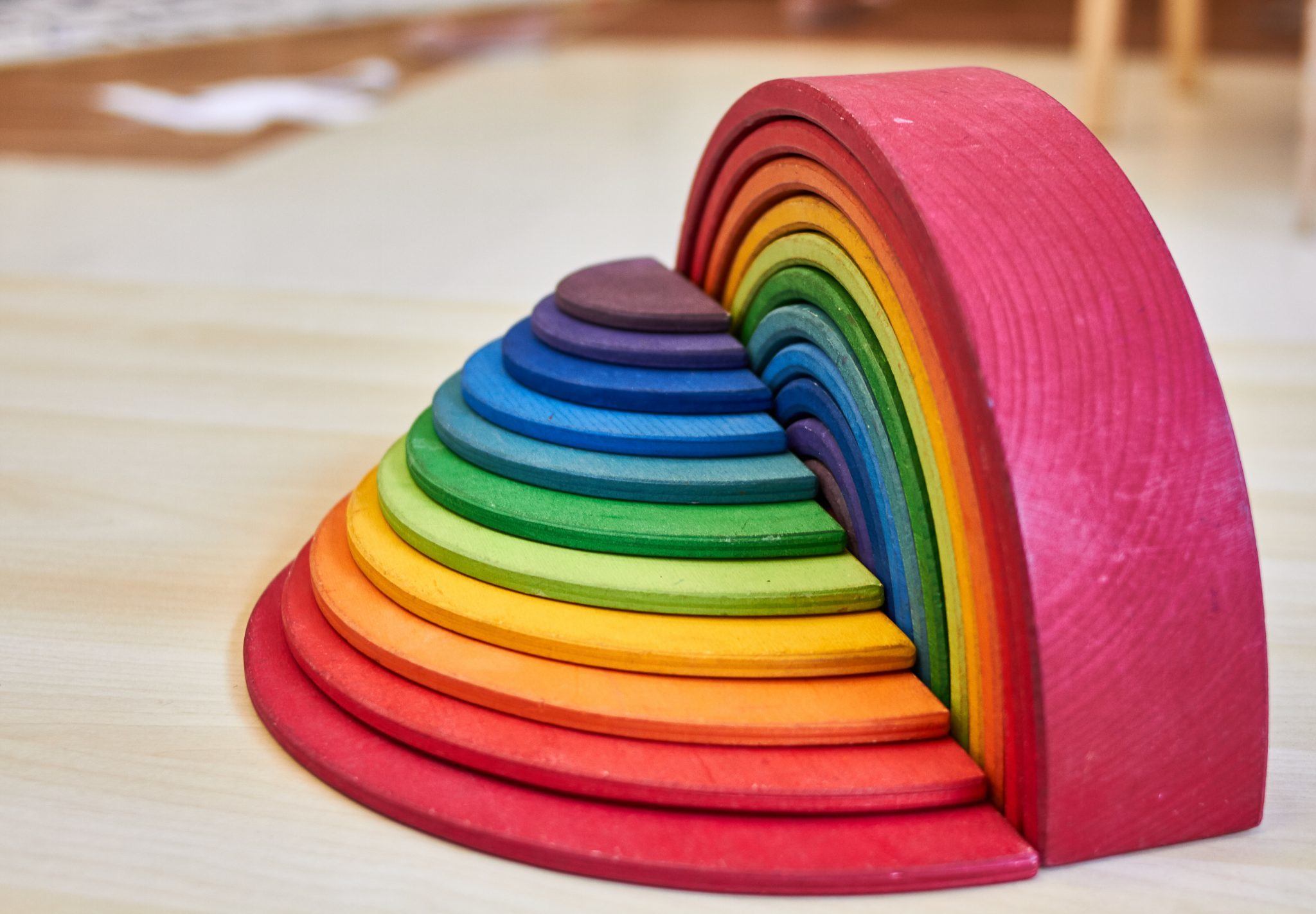 The question is can you afford it no matter the outcome. With any toy, any activity you set up/suggest, ultimately your child will choose to play with it or not.

I just want to reassure you, if you don't have the budget, your children are not going to miss out because they don't have a Rainbow.
Is the Rainbow Montessori Inspired? Not really.

Is it beautiful and great for children? Sure. It is sometimes even considered a piece of art.

Is it a must-have for your children? It's up to you to decide what your child needs!

So do you have Grimm's toys? Are you a fan?